Pre Production Meetings: What Every Brand Manager Should Know 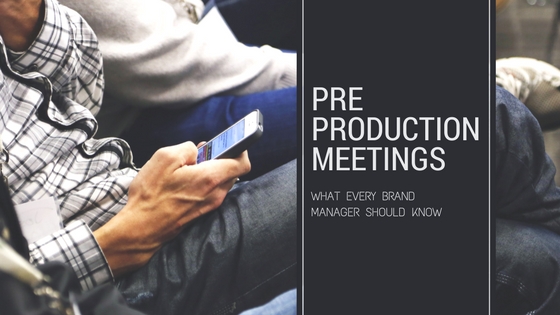 OK, your storyboard is finally approved (with a few footprints on it, left by various Advertising Managers, Marketing Managers, and Division Presidents) and you’re ready to produce it, EXCEPT for the pre production meeting.

This is an inordinately critical stage of your incipient commercial’s life.  Unrecognized possibilities for disaster loom on every side, and people start talking a new language: “production gobbledygook”.  And you have to midwife your baby through the last stages of its pre-natal existence.

Take heart.  What’s more to the point, take this article to your next pre production meeting.  It may help.

Why Have a Pre Production Meeting at All?

Two excellent reasons:  To save money and prevent mistakes.  The pre-pro meeting is the time when the people who have planned the commercial get together with the people who are going to execute it.  It’s terribly important that the ideas and hopes and “watch-its” get transferred understandably and unerringly.

When to Have a Pre-Pro Meeting:

Not less than a week after you’ve got the board approved (really approved, no hold-outs for the Legal Department) and at least two days before you want to start shooting.  The temptation is strong to hurry things, but don’t forget that pre-production is a planning stage; hurrying a bid from a production house means more pad as the production house rep, deprived of time to get thorough answers and check out alternatives, simply covers his risk with a few creative entries.  Hurrying an agency’s casting department means they have to settle for whatever actor’s available, rather than taking time to think, carefully, about who would be best for the role and then tracking them down.  Hurrying the production schedule means you might have to settle for bids from three directors, but all of those available might be second choice.

Time spent constructively in pre-production comes back to you in speedier editorial and quicker finishing.  So, despite the temptations to ram your commercial into production quickly, don’t.  You will be shortcutting yourself and your job.

Who to Have at a Pre-Pro Meeting:

You, certainly.  The Brand point of view must be represented, for questions will surely arise.  Your Production Representative, if you have one, should be there for he’s your interpreter: he’s the person who can see puzzled frowns developing, and realize that the director doesn’t understand your need for a certain product handling, or you don’t understand his need for a return wall on the set.  (If you don’t have a Production Representative – AHA! – call us.  We’ll do that for you.)

Beyond that, the Agency Producer should sit in, or whoever at the agency fulfills that function.  If you have a Copy/Art creative team on your business, OK, but the function of Agency Producer must be represented by someone who knows production thoroughly.  If you go, your opposite number Account Executive certainly will; but remember, the fewer people involved, the better.  Insist that either the director be there or someone who can commit him.  Since the purpose of the pre-pro meeting is to reach agreements, you don’t need to talk to the director’s functionary, who later has to rescind commitments because the director, on subsequent consultation, doesn’t agree.

Props, set decoration, wardrobe, and other specialists will attend as needed.

What to Cover at a Pre Production Meeting:

To bring order out of the chaos; to provide an agendum to which everyone can subscribe; and, most importantly, to make sure all subjects are covered – the following is a workable but not onerous outline:

What to Get Out of a Pre Production Meeting:

Clearly, the steps above are going to lead to a number of decisions.  Equally clearly, these decisions should be written down so that they can be screened, agreed to, and reviewed by anyone involved in the production.  This means a pre-production call report – and it’s an important document.  Don’t let your agency get by without writing it.  You will need it in the screening room as a check against your commercial objectives.

Does All This Sound a Little Complex?

Certainly, that’s why MRA was formed.  We can help guide you at this most important meeting – as we can through the entire production process – so that you get better commercials at lower costs.  If you need any help – give us a call, contact us online or give us a call; we’d like to help you!